If you’ve chosen Team Dog over Team Humanity, you’re not alone. It’s well-known that most pet lovers prefer the company of their animal friends more than other people.

But people aren’t always so bad! These humans prove that, when it comes to saving our furry friends, people are willing to take on just about anything.

1. Man Punches Kangaroo To Save His Dog

Although this video went viral, it has a surprisingly sad backstory. When 19-year-old Kailem Barwick was diagnosed with terminal cancer, his friends decided to take him out on one last boar hunting trip. Zookeeper Greig Tonkins decided to take his dog along for the ride.

Tonkins’s Doggo certainly caught the scent of something and went flying into the deadly headlock of a giant, killer roo. Rather than let his pup meet a gruesome fate, Tonkins punched the kangaroo right in the face. The rest was viral history.

Barwick tragically passed away before the clip circulated around the world, but his friend Matthew Amor was happy about its success. “Kailem would be looking down from up there [heaven] and laughing because it was the highlight of the trip” he told an Australian newspaper.

A group of Kazakhstani teenagers came together to form a daring human chain after noticing a dog trapped in the rushing waters of a reservoir below. Five men clutched onto each other’s arms while dangling over a steep edge to bring the dog back to safety.

3. Woman Punches Coyote To Save Dog

Nettie Blanco of Highlands Ranch Colorado had heard about coyotes attacking pets in her neighborhood. But when she saw a coyote holding her precious 9-year-old Shih Tzu, Sammy, by the neck, she saw red. “Even when I’m mad at my husband, I’ve never felt what I felt that day,” she told local reporters. “I just had to hit him.”

Nettie took a swing at the coyote, which dropped Sammy and sprung back over the fence. Sammy had to spend a few hours in surgery, and Nettie had a bruised set of knuckles. But other than that, both made a full recovery.

4. Young Girl Dives Into Frozen Lake To Save Beagle 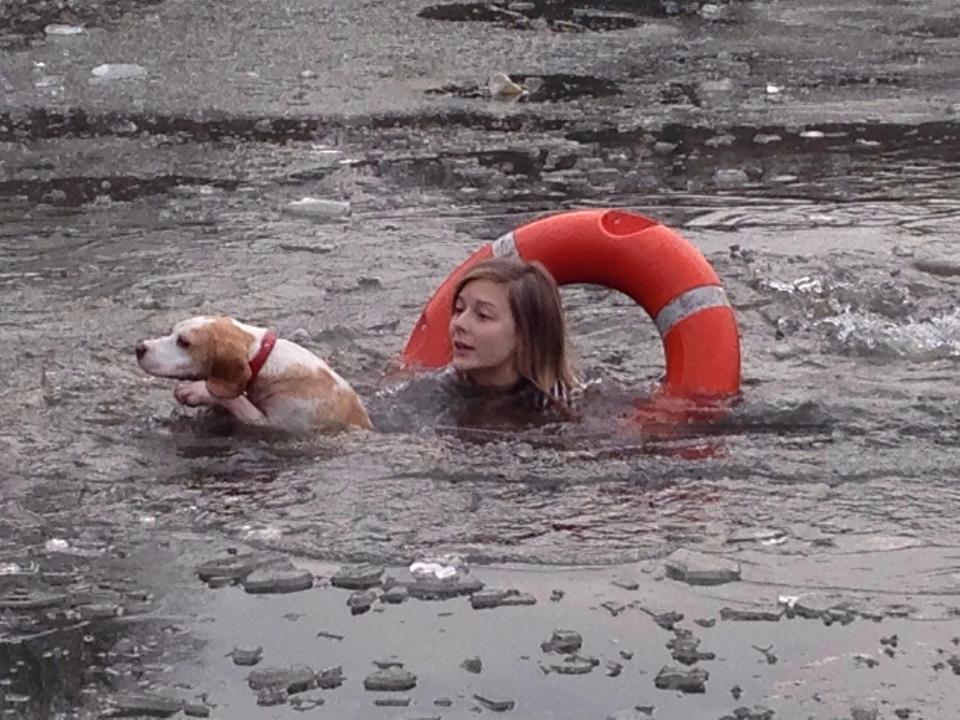 After a pet Beagle ran across a frozen lake to chase a bird, bystanders were horrified when the animal fell through the icy surface. Within seconds, the Beagle’s young owner jumped — fully clothed — into the frozen London lake. According to witnesses, the young woman punched through the solid ice to get to her dog, and she finally dragged the frightened hound out of the lake.

Watch the astonishing video below:

Although these stunts aren’t worthy of an action movie, sometimes it’s the small things that make the biggest difference.

When a young man in Los Angeles found an incredibly sick Husky in a trash heap, he didn’t walk the other way. Instead, he took the mange-infested pup to a local veterinarian and saved her life. Miley the Husky made a remarkable recovery, and this video has made animal lovers around the world shed tears of joy.

A 73-year-old California man took on a fully grown black bear when his Chihuahua’s life was on the line. Carl Moore claimed to hear his dog whimpering outside, so he sprung to action. Outside, he found a large black bear about to snatch up his pup.

Moore’s friend, John Sargant, was also on the scene. “Carl just smacks it, I couldn't believe it," he told the local news. Moore said he has no regrets and would do it again. "I ain't run from nothing; I never have in my whole life and I ain't going to start now," he said. "And you're not going to sacrifice my babies for some damn bear." Tiny Jake the puppy was one lucky dog to have Bill Lindler as a neighbor. At only three weeks old, Tiny Jake found himself trapped inside a burning shed as his owners hollered for help. Lindler was a veteran firefighter, and he acted quickly to rescue the tiny pup.

Sadly, Tiny Jake suffered burns to 75% of his body, and his owners were unable to pay his vet’s bills. But Lindler decided to adopt Tiny Jake and pay for his vet’s bills himself. Adopted by the local fire department at large, Tiny Jake was initially going to become a therapy dog, but instead, he became an arson detection dog. What a way to repay the firefighter who rescued you! 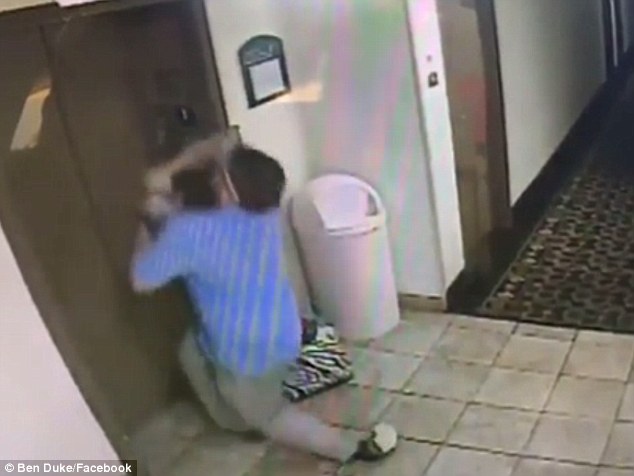 It could have been a dog owner’s worst nightmare, but thanks to the quick thinking of a South Carolina hotel manager, it was just a nasty scare.

When a hotel guest entered an elevator, he didn’t see that his dog was lagging behind. When the elevator doors closed, they caught the dog’s leash and dragged the poor puppy up like a scene straight out of a horror movie. Hotel manager Ben Duke reacted with lightning speed and managed to unleash the dog just in the knick of time.

Boo Boo the dog was fine, but his owner expected the worse and came running down the stairs in floods of tears. Imagine his gratitude when he found the dog completely unharmed, but slightly shaken and waiting for him.

9. Firefighters Rescue Dog That Falls Over A Cliff

When an inquisitive pup went sailing over the edge of a San Francisco cliff, bystanders were horrified. Luckily, the heroic fire department didn’t hesitate before donning a harness and following the fallen pup.

A brave firefighter rescued the doggo, who was unharmed, and the San Francisco fire department issued a warning for local dog owners to read the signs and stay away from the perilous cliff edges. Don’t have to ask me twice.

From kangaroos to coyotes, there’s nothing that devoted pup parents won’t face to save their cherished pets. Royal Canadian Mounted Police Sergeant Will Gib didn’t hesitate before facing off with a cougar in order to save his pair of Huskies.

After letting his pair of Huskies outside for a run, Gib returned to his coffee — he heard his female Husky, Sasha, yelping. Gib flew to her rescue, realizing something furry was wrapped around his precious dog.

He didn’t question what this furry thing was until it punched it in the head and realized it was a cougar. Gib chased off the cougar and attended to his wounded dog, who bit him out of pain and confusion. “I think she thought I was the cougar,” Gib told the local news.

Just as he was fending off his own wounded dog, the cougar re-emerged from the forest and attacked. "[My dog] was fighting for her life, and I was trying to keep the cougar at bay with my right, and it was pawing at me and I was throwing punches at it," he said.

Gib’s injured Husky ran off, but the cougar wasn’t as sensitive to punches as a kangaroo or a coyote.

"I could see the cougar going for [my other dog], so I got between him and the cougar and started swinging and screaming at it, and called for my brother and friend to come give a hand," Gibb said. "And then I reached down for the closest, biggest stick that I could find and I ran back into the trees to go fight the cougar."

Gib’s brother and friend managed to help him get the dogs in his truck, and finally, the cougar backed off. After extensive treatment at the veterinary hospital, Gib’s dog made a full recovery. But Gib has some wise words for anybody who comes into contact with this wild cat.

“I wouldn't recommend everybody wrassle with a cougar,” he said.

How To Find Pet Friendly Apartments For You And Your Pooch

“Can Dogs Sense Pregnancy?” And Other Questions A Mom-To-Be Has For Her Dog